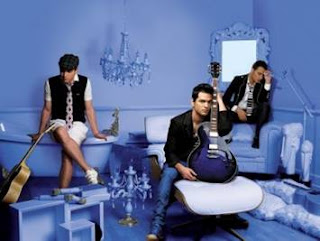 The guys from Reik are getting ready to set off to Monterrey City, Nuevo Leon, these upcoming 19th and 20th, to film “Fui”, the second single off their latest album, “Un Día Más”.

On this occasion, “Chiva,” Jesús Rodríguez, will direct the video, which will be filmed in different locations throughout Sultana del Norte. “Chiva” has become characterized for his great creativity and the quality of his films.

“Fui” is a ballad that shows the more romantic and melancholic side of the guys from Reik. The track can already be heard on radio stations throughout Latin America and the United States. It is one of nine songs in this new album, where Jesus, Julio and Bibi participate as coauthors.

“Inolvidable”, the first single off “Un Día Más”, is currently at the top of the popularity and radio charts in México, Argentina, Chile, Colombia, Costa Rica and the United States, placing the trio among the favorite Spanish pop groups in the American continent.
“Un Día Más” is on sale, under Sony Music label. It was recorded in Buenos Aires, Argentina, during the months of May and June in 2008, and produced by the talented Gerardo “Cachorro” López.

Visit Reik’s official channel for exclusive content from the group!

Aerosmith unable to perform at upcoming show in Venezuela