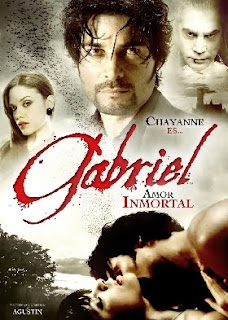 This exclusive box-set will include all the episodes of the series, along with behind the scenes footage, deleted scenes including the famous love scene between Chayanne and Angelica Celaya that was too hot to show on television, and music videos featuring songs by Chayanne, and Jose Luis "El Puma" Rodriguez.

Chayanne portrays the modern day vampire, "Gabriel," a tortured being whose only hope of salvation lies in reuniting with his reincarnated soulmate, Eva, played by the Mexican starlet, Angelica Celaya.

Eva was killed over 300 years ago when Gabriel was still mortal and his village was attacked by the bloodthirsty, conquistador-turned-nightstalker, Pizarro, portrayed by Jose Luis "El Puma" Rodriguez. Doomed to roam eternal darkness after being cursed by an Inca princess as revenge for the destruction of her village, Pizarro threatens to once again rob Gabriel of his long-lost love.

"It was something that fans kept asking for and we felt it was time for the series to be released on DVD," said Agustin, Creator, Writer and Director of Megaseries "Gabriel." "The DVD allowed me to include things that I wasn't able to show on television, like more blood, more action and more passionate scenes. Additionally, what we have included on the DVD set is what most resembles my vision for the Mega-series."