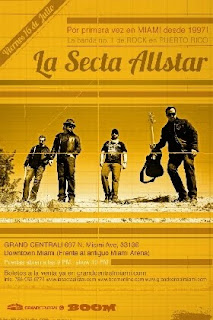 Currently nominated to Premios Juventud on the same category, the ceremony will take place in Miami the day before their concert

MIAMI, June /PRNewswire-HISPANIC PR WIRE/ — (Boomonline.com) It's exciting times for Puerto Ricans and Latinos in general living in Miami, as they are celebrating the newly announced concert date of LA SECTA ALLSTAR in that city. LA SECTA ALLSTAR is Puerto Rico's number one rock band.

The band is nominated this year, once again, to Premios Juventud, for Best Rock Album.

On February 2010 the band won the prestigious Premio Lo Nuestro award in the "Rock Album of The Year" category. Currently the album is also nominated for Premios Juventud in the same category.

The awards ceremony will take place in Miami on July 15th, the next day, the band will perform, for the first time to a major audience in that city since 1997 since most of their trips to this city consisted of tv shows, special appearances and industry showcases. The concert will take place in Grand Central, the trendiest club in town, located at 697 N. Miami Ave, 33136 Downtown Miami (in front of former Miami Arena). Doors open at 9 PM, show 10 PM.

Tickets on sale now at http://www.wantickets.com/Events/115717/La-Secta-Allstar.aspx