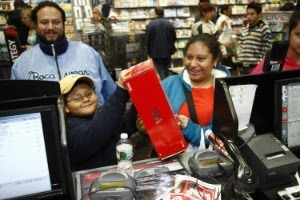 In this photo provided by Nintendo of America, a GameStop employee hands a limited-edition red Wii console to Bryant P., 7, father Osvaldo P. and aunt Hellen P. of New York on a busy Black Friday at the Westfield Garden State Plaza in Paramus, N.J. on Nov. 26, 2010 (Photo: Business Wire)

«U.S. shoppers bought about 9,000 Nintendo hardware systems nonstop for every hour of every day during the week of Black Friday»

.»U.S. shoppers bought about 9,000 Nintendo hardware systems nonstop for every hour of every day during the week of Black Friday,» said Nintendo of America President Reggie Fils-Aime. «For the past several years, consumers have decided that Nintendo defined both top value and all-inclusive entertainment, and that sentiment continues again at the start of this shopping season.»

Nintendo’s Black Friday surge was fueled by multiple new hardware colors, each of which comes bundled with games. The bundles provide a great value for shoppers who are looking to get the biggest bang for their video game bucks. These bundles, all of which are available while supplies last, include:

•Orange and green Nintendo DSi™ systems, which are bundled with the Mario Party™ DS game. They are available at a suggested retail price of $149.99.